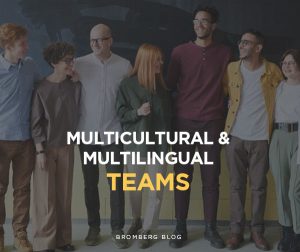 The Increasing Demand for Multilingual Employees

Everyone has their own ideas on how to make some extra money, but few Americans today understand the economic benefits of speaking two (or more) languages.

One of the most rewarding aspects of the human experience is our ability to connect with others. Being able to communicate with someone in their language is an incredible gift. Bilinguals have the unique opportunity to communicate with a wider range of people in their personal and professional lives. Knowing the language makes you a local no matter where you are, opening up your world literally and figuratively. You will be shaped by communities. You will be humbled by the kindness of strangers. You will build lifelong friendships. And for these reasons alone, you will see the reward of learning languages for many years to come.

Language skills can be a significant competitive advantage that sets you apart from your monolingual peers. They are among the top eight skills required in all occupations—no matter your sector or skill level—and the demand for bilingual professionals is rising exponentially. In fact, between 2016 and 2021, the number of U.S. job postings specifically geared toward bilingual candidates more than tripled. First of all, employers are seeking professionals who can communicate seamlessly with customers in new and expanding overseas markets, as well as serve and sell to a large foreign-born population here at home. With more than 60 million U.S. residents who speak a language other than English at home, you don’t need to get on a plane to put your language skills to work. Secondly, as an added incentive, in many instances, language skills also lead to hiring bonuses and increased salaries. Whatever your career aspiration—with language skills added to the mix, you’re ahead of the crowd!

3. Deepen Your Connection to Other Cultures

Language is the most direct connection to other cultures. Being able to communicate in another language exposes us to and fosters an appreciation for the traditions, values, religions, arts, food, and history of the people associated with that language. Greater understanding, in turn, promotes greater tolerance, empathy, and acceptance of others—with studies showing that children who have studied another language are more open toward and express more positive attitudes toward the culture associated with that language.

Not only does learning a second language improve communication skills and multiply vocabulary in your first language—yes, really!—but research shows that it makes picking up additional languages a much easier feat, especially among children. That’s because when you learn a new language, you develop new brain networks that are primed and ready when you embark on learning a third language.

Any language learner can attest to making his or her share of mistakes while discovering a new language—often in front of an audience. It’s a necessary part of the learning process! Learning a language means putting yourself out there and moving out of your comfort zone. The upside is the amazing sense of accomplishment you’ll feel when conversing with someone in their native language.

Studies show that decisions made in your second language are more reason-driven than those made in your native language. Contrary to popular assumptions, when we deliberate in a second or third language, we actually distance ourselves from the emotional responses and biases deeply associated with our mother tongue. The result? Systematic and clear-headed decisions based on just the facts.

The Economist ‘s data crunchers calculated that employees who speak more than one language can earn an extra $67,000 throughout their lifetime. And that’s on the low end; on the high end, bilinguals can earn an extra $128,000 thanks to their language proficiency.

According to language expert and CEO Ryan McMunn, learning a second language can increase your earnings by 10-15%. Without fluency in Mandarin, McMunn would not have had the opportunity to develop relationships with Chinese executives and conduct business successfully. The language barrier would have been insurmountable. How does that sound to you?

Bilingualism is also rewarded by government entities in the United States. Multilingual military personnel earns an extra $1,000 per month on average. While the CIA does not release official numbers, they have indicated that developing multilingual talent is “an imperative at the CIA.”

Indeed, 9 out of 10 European recruiters believe that bilingualism is essential when hiring new personnel. Similarly, in a survey of North American employment recruiters, 66% thought that bilingualism will become increasingly important over the next10 years.

But how exactly does knowing a second language help you earn more money? Aside from employment like interpreting and translating (both of which the Bureau of Labor expects will expand 28.7% over the next ten years), there are other ways that learning a second language directly increases a worker’s chances of earning more.

Hiring managers notice the improved cultural sensitivity and intelligence that comes with being able to speak a foreign language, for example, for job seekers trying to stand out from the crowd. Similarly, proving that you’re studying a new language increases your chances of getting promoted in the service profession. Companies of all sizes require personnel to engage with overseas markets, either by traveling to the location or via a remote connection. Simply being able to “meet and greet” offers you a huge advantage. A second language might help you connect with your clients and community if you own a business.

The economic advantages of bilingualism are numerous. Don’t miss out — do yourself a favor and start learning a new language today.

If you feel you’re ready to instantly make your career more profitable, try Bromberg today. Available at all levels – beginners, intermediate, and advanced and on all your devices.

Learning a language pays for itself while providing an exciting and fluid language learning experience that fits your busy schedule.