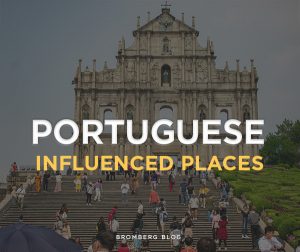 3 Portuguese-Influenced Places Around the World that Will Surprise You

Portuguese is one of the most commonly spoken languages in the world, with around 258 million speakers worldwide. The largest population of Portuguese speakers can be found in the South American country of Brazil, but the United States also boasts a population of almost 700,000 speakers. A large majority of these speakers need language services to access basic needs such as education, medical treatment, and social services, which is why Bromberg & Associates boasts Portuguese as one of our 20 in-house languages and among the 200+ other languages in which we provide services.

When most people think of where the Portuguese language is spoken, they imagine the cobblestone streets of urban Portugal or the rolling green mountains of Brazil. However, Portuguese is one of the few languages that can be found on every continent, thanks to the reach of their colonial empire. The language and the culture of Portugal has influenced food in Macau, China; music in Cabo Verde; and even the architecture in Colonia, Uruguay. This blog will take you on a journey through these three different parts of the world today whose modern cultures are intrinsically tied with Portuguese language and culture.

China: How a Portuguese language blend created a new dialect in Macau

Macau is a city and special regional district of China where part of the population speaks Patuá, one of the various endangered languages we will discuss in this blog. This unique language is a blend of Portuguese, Malay, and Sinhala, making it one of many on the list born during the period of colonialization. Portuguese colonization of the region started in the mid-1500s and continued until 1999, over 400 years later. Today, Portuguese language and culture still play an important role in the daily life of those who live in Macau. In the historic center of Macau, one can find arches adorned with Portuguese around the block from neon signs communicating Cantonese. Patuá, unfortunately, is listed on UNESCO’s Atlas of the World’s Endangered Languages and was estimated to have only about 50 speakers in the year 2000.

Uruguay: Colonia and its Portuguese Heritage

A quick ferry ride across the río de la Plata from Buenos Aires, Colonia, Uruguay, is a small city with a unique history situated on the hip of the river. Colonia del Sacramento is a cobblestone city where the Portuguese-era architecture juxtaposes the Spanish on the streets. Before the Portuguese came in 1680 with a navy and artillery to build a fort, the area was populated by various charrúa ethnic groups. The majority of them were chaná-timbúes, who based their livelihood off of canoe fishing and hunting. The Portuguese were accustomed to eating seafood as well, and today seafood still plays an enormous role in the diet of a person living in Colonia.

A walk through the neighborhoods of Colonia reveal steep cobblestone avenues with homes painted bright colors and archways reminiscent of Portuguese colonization. In the historic center there is a bridge crossing what’s left of an old moat before entering the obsolete fortress. There are various towering walls, designed originally to protect the fortress from invaders but which now serve as a unique backdrop to daily life in this port city.

Cabo Verde is a collection of islands off the west coast of Africa, just a hop in the Atlantic away from Senegal and Mauritania. The country received its independence from the Portuguese in 1975. However, something unique about this land is that there is no evidence of life on the islands before the descoberta in 1456. The culture that thrives on the island today has Portuguese roots but is heavily influenced by the nature of the island as well as the culture of other former Portuguese colonies. Musicians like Mayra Andrade represent the islands well, producing music in various genres like funaná, batuque, coladeira, and jazz. Funaná, batuque, and coladeira are three genres unique to Cabo Verde that have heavy percussion and are meant for dancing. The history is rooted in the Trans-Atlantic Slave Trade, since many of the inhabitants of the island today were brought from mainland Africa during this time period.

Mayra Andrade, like many other Cape Verdeans, is also multilingual, singing in English, French, Portuguese, and Crioulo. Crioulo is one of the oldest creole Portuguese languages, dating back to the early days of the slave trade. Like Patuá, its numbers are declining drastically and rapidly.

The expanse of Portuguese influence around the world is complicated. The seafood of the South China Sea meets the egg tart of Portugal in the port of Macau, China; the rhythms of Africa and Europe come together in the music of Cabo Verde, and the architecture and history of Colonia del Sacramento reflect something different than the rest of Uruguay. The languages spoken in these regions should be revived and practiced.. The cultures that exist in these regions of the world today are inimitable because they are a reflection of their peculiar histories, now all inextricably linked to Portugal.

Follow us on Facebook and Instagram for more language insights. Also, you can visit our Language Training and Cultural Awareness Programs for more information on our linguistic services.