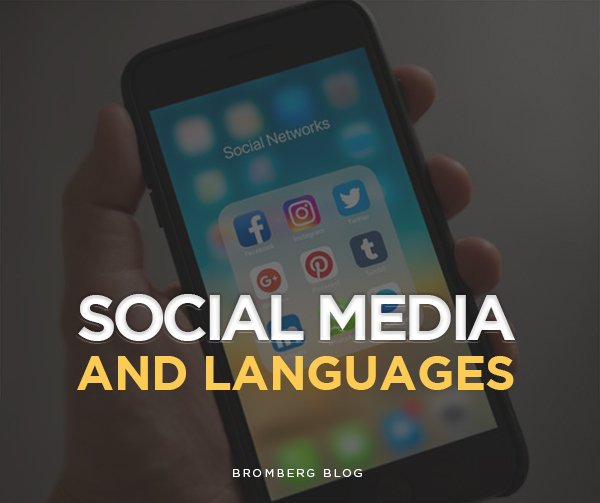 When social media networks started to flourish the mid-2000s, people from all over the world began to connect in a whole new way. As popular services like Facebook, Twitter, Instagram, LinkedIn and now TikTok, expanded globally, they faced the challenge of offering their platforms in their user’s native languages.

Social media companies understood, however, that providing their content and services in different languages was key to their growth. In 2008, pioneer social network Facebook asked users to translate its platform by using a crowdsourcing tool. A few years later, other well-known social media services like Twitter and Instagram took a different approach, by rolling out progressively different languages in their interfaces.

But is it as easy as this? As we know, localizing web content is key for any product or service that wants to successfully reach a global audience. But did social networks localize or did they just translate their interfaces? These five short stories and facts about language on social media platforms give us better insight on that.

1 – Facebook has the most languages supported. Is it good enough?

As far as language availability goes, Facebook is the social network that provides the most options. You can use Facebook in 111 languages, including not only variations within a language (for example, Spanish from Spain or Spanish from Latin America), but dialects, such as Pulaar (spoken in West and Central Africa) and Corsican (which is spoken by some 200,000 people and listed on UNESCO’s Atlas of the World’s Languages in Danger).

When expanding its supported languages, Facebook relied on artificial intelligence to translate user posts, comments and replies. This allowed users to see automated translations, which could be as quick as they were inaccurate. Mark Zuckerberg´s giant venture became the social network that offers the most languages, but as it is powered mainly by automated software, how good is it?

In addition, Facebook’s content moderation workforce can only speak 50 languages. This explains why unwanted content, such as spam and phishing comments, take longer to moderate by the Facebook team when they are in languages other than English.

2 – TikTok: languages as the base for its quick growth

With 75 languages active, TikTok holds a surprising second place regarding the availability of languages on its platform. Considering that it was just released in 2016, the Chinese social network has taken into account their user´s different languages for its global business plans.

In China, TikTok has a different name and is a separate service: Douyin (抖音), which stands for “short video”. In 2018, this social media platform experienced a boost when it merged with another service that was quite popular at the time: musical.ly.

Since then, TikTok has been growing it´s user base consistently and is becoming a leading social media platform in many countries. It was the most downloaded app in 2020 and was the second most downloaded just the year before.

The USA ranks second in the number of users on TikTok:

In less than five years, TikTok has made available more languages than many of its competitors. TikTok has expanded into 150 markets, something that would not be possible, if the app had not invested in providing its platform in other languages than its original.

Twitter holds the third place with 67 languages available. Even though English is the most popular language, Japanese has been on the rise for the past few years. In fact, in 2018 it surpassed English in original tweets.

Which brings us to highlight an important detail regarding languages and Twitter evolution. Back in 2017, Twitter broke some big news: the 140-character limit was expanded to 280. The reason? Languages.

“In languages like Japanese, Korean, and Chinese, you can convey about double the amount of information in one character as you can in many other languages, like English, Spanish, Portuguese, or French,” said Twitter product manager Aliza Rosen.

Before this, what was the impact of the 140-character limitation? Shortening words became a common rule as users were counting each character of their messages: BC (Because), Bday (birthday), B4 (before) are some well know examples. RT and Fav became native acronyms and many lists and guides for understanding Tweets surfaced.

The results? Even though tweets have not extended in length on average, the use of abbreviations has dropped, which may be related to a rise in engagement and replies.

4 – Instagram´s algorithm: the world of hashtags

Instagram has a long way to go. Only 39 languages are available on its platform, with English being the most common. It was not until 2017 that it finally featured right to left reading languages like Arabic and Hebrew.

If you are an avid Instagram user or Instagram marketer, you are surely familiar with how hard it is to get content displayed to users in an organic way. Several changes have occurred over the years in the way that Instagram organizes content.

As Instagram’s user base expanded, many experts recommended using hashtags in multiple languages in addition to English, for instance: #love #amor #amore (for English, Spanish and Italian) and so on. This became a common technique to increase a post’s reach, as many users who are not native English speakers still follow English hashtags.

It is always recommended to search for hashtags first, as some may have a meaning in the community that does not match your target audience or interests. Also, including English hashtags became a common ground to connect people with similar interests over the world. For example, if someone works in cartoon illustration and lives in Spain, hashtags in English, Spanish and Italian such as #cartooning #caricatura and #CartoniAnimati may be useful.

5 – LinkedIn: the one with least languages but it allows multilingual profiles

With almost 20 years online, LinkedIn supports 24 languages. That is the most limited language availability compared to other social media networks, but it must be said that LinkedIn has a specific and remarkably interesting asset: it lets users create multilingual profiles. As LinkedIn is a social network focused on professional connections, jobs and business opportunities can come from many countries and places. This makes multilingual profiles a handy feature.

Having your LinkedIn profile available in other languages makes you more visible for searches in those languages, as you can use different keywords to describe your work, abilities and fields of expertise. Even more, it allows you to showcase how proficient you are in different languages.

In today´s world, remote jobs and multicultural teams that live in different countries are more common. Companies have realized that technology allows them to work directly with people in different places. More and more often, being multilingual is cited as a requirement for many positions (but that is a subject we will address in another blog post).

Language & Culture: A key to growth

Localization goes beyond translation of text and words. These were just five short stories about social media networks, aiming to provide a little insight on how they have evolved regarding the subject. Of course, the scenario today is quite complex, with internet content being consumed all over the world and billions of users generating posts and comments on social media platforms.

Key to this was also providing local businesses with a way to connect with potential customers in their area. All of this was only possible when social media adapted their services and interfaces to the markets they wanted to reach.

There is still a long way to go in improving social media and language experiences, but, the truth is that providing their services for different countries and cultures has been crucial to each of these platforms’ global expansion.

Do you want to take your online business or project to the next level? Be sure to reach out to us. We at Bromberg & Associates provide high quality translation services and localization solutions to help you reach global markets.