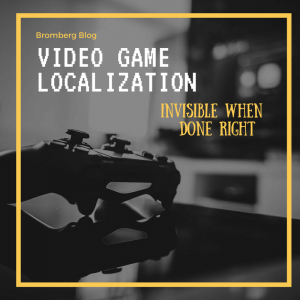 Imagine you’re playing a just-released video game: the graphics are sharp, the character development is solid, and you’re fully engrossed. And then, the game delivers this cringe-worthy message: “All your base are belong to us.”

In 1991, the grammatically wrong text appeared in popular video game “Zero Wing,” and is still a popular talking-point regarding video game localization, and lack-there-of, today.

But, localization isn’t only about translating text — it’s about adapting a presence to a target market. Regarding video game localization specifically, linguistic and cultural references, soundtracks and graphics, and proper internalization is principal for success in the global market.

The History of Video Game Localization

Today’s video game localization looks quite different than that of the recent past. In its early days, video game localization was mainly an afterthought limited to the translation of game text, manuals and packing. Now, video games that were made in the 1980s and 1990s, such as aforementioned “Zero Wing,” are quoted for their poorly translated text and made into memes.

However, the era of poorly localized video games also kindled a revolution of better-localization techniques, such as hiring professional translators and editors (as opposed to using in-house employees who knew a smattering of English), spotlighting expert voice actors and incorporating graphics and music that is culturally relevant. These localization advancements have brought about a better player experience and chart-topping sales in the video game market.

After the developers and publishers familiarize themselves with the chosen game for 1-3 weeks, the team begins localizing the game. While the time required to localize depends on the project, computer game makers often spend between 1 and 8 weeks on the localization process. The number of editors and translators also depends on the size and organization of the project. While some games are well-organized, other games are tedious to manage and contain disjointed files.

After the initial localization process, programmers implement and finalize the changes; quality control folks evaluate the work for any bugs, including typos, sound glitches and more; manufacturers perform their own internal tests and, finally, the game enters the development phase.

Localization of a Computer Game

During each phase of the game-making process, localization must be considered. While great games include great translation, localization moves beyond translation and must also include transcreation — the revising and adjusting the style and tone of a message when rendering it from one language to another, as to keep its intended meaning. While the actual computer games may differ in terms of gameplay and user interface, the feelings the game evokes should remain the same. Some additional localized content to be considered include the following:

When talking about video game localization, linguistic and cultural references include idioms, popular turns of phrase and cultural norms. For example, when “Team Fortress 2” was released in Germany, game makers had to remove depictions of violence such as blood or detached body parts in the game to adhere to the country’s policies surrounding gore.

In addition, in the 9th edition of Final Fantasy, video-game company Square Co. switched leading character’s literally translated name “Zidane” to “Yitan” in the Spanish version and “Djidane” in the French version to avoid confusion regarding any relation to popular French football player Zinedine Zidane.

While linguistic and cultural references are important, it’s crucial to remember that localization includes soundtracks and graphics, too. An excellent example was when Atari switched the soundtrack in one of its driving games released in the U.S. from its original dance music to rock music for Japan. By making this relatively tiny tweak for cultural tastes, Atari increased its sales by about 20 percent in Japan.

And, when Nintendo made the opposite move of a popular game in Japan to the U.S., Nintendo equally had to keep American’s likes and dislikes in mind. When introducing Kirby, a lovable pink puff, to the United States, gamemakers wanted to make the character less cutesy innocent-looking for American players. The solution? The round ball was given a set of furrowed eyebrows.

The Future of Video Game Localization

From vital video game internalizations, such as calendars and video standards, to character appeal, video localization is an indispensable part of the game-making process. Done incorrectly, a video game could be the “Zero Wing” meme of the future. However, done right, video game localization is invisible to the user, making gameplay natural, smooth and fully engaging.

**At Bromberg, we understand the importance of localization for video game developers, businesses, and organizations considering expanding into the global marketplace. By investing in localization services, you can be sure that your product, business or organization is not only accessible worldwide, but also appealing to your target audience’s culture. Be sure to read  this previous blog on how website localization can transform your business and contact us to learn how we can help you.