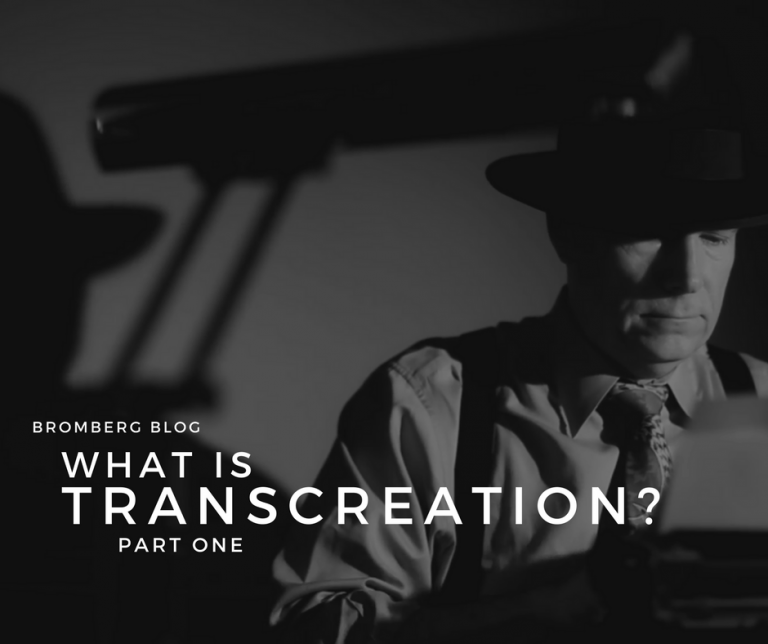 Think of it this way: where translation is the process of converting the message, while keeping most of the content, that is words and phrases, as close as possible to the original text, transcreation is the translation of ideas and concepts. As the end result, the words and phrases used to create the transcreated content may be completely different, as long as they deliver the intended message. The key to successful transcreation is understanding the target audience for whom the message is being created for.

When preparing a project for transcreation, consider these questions:

Transcreation is certainly a form of creative writing, since it’s taking the source text and recreating it in a new language while preserving the same meaning by adapting idioms, speech, phrasing and nuances to better resonate with the target audience. If something has been translated but isn’t quite understood culturally, then it must be transcreated. If a culture has a word or phrase that has no direct translation, transcreation would also be used to create a phrase in the translated language that evokes a similar emotion or train of thought.

An example of successfully transcreated message  is Procter and Gamble’s Italian Swiffer campaign in 1990. Their original slogan in English was “When Swiffer’s the one, consider it done.” The challenge with this was that a direct Italian translation would not have worked for the target audience because of the missing rhyme and meaning. So they came up with a new slogan “La polvere non dura, perché Swiffer la cattura.” (“The dust doesn’t last, because Swiffer catches it”). This solution not only creates a different rhyme and metre, but it mentions the benefit (eliminating dust) and the process of how it does this (by catching it) whereas the English original mentions neither of these two elements. This is widely regarded as one of the better examples of creative slogan translation.

Transcreation is a relatively new term and really isn’t used much outside of the advertising and marketing world. The reason why advertisers coined this term, was because so much of their industry relies on slogans, idioms, and puns, all of which can be very easily lost in translation.  Agencies did realize that some slogans did translate appropriately, but the literal meaning was completely different, thus a new slogan would be thought up in that language.

A common example of this is in movie titles that run internationally. For instance, The Dark Knight was re-titled in Spanish due to confusion of the literal translation. The Spanish version was thought to be a horror film, as it was much darker sounding and studios feared people would not think of it as a superhero movie.

Why Transcreation is important

Transcreation was originally created for companies to be more effective as globalization was on the rise. That is still a very important aspect of transcreation, but recently there has been a growing movement of glocalization. The key phrase when it comes to glocalization is, “Think global, act local.” Glocalization is the idea that as local cultures become more diverse, businesses strive to stay competitive and appeal to these new markets. To do this, it is essential for businesses to consider transcreation as part of the strategy when looking to expand globally. No matter what business or brand you are looking to expand, connecting with the target audience is the best way to ensure your message is properly received.

For more effective glocalization, many larger companies will create separate sites for different countries and cultures. McDonald’s, for example has a corporate “Around the Globe” page. This is another example of transcreation. Additionally, if you search McDonald’s in Kuwait, for instance, you may notice how the menu is adapted to the preferences of the local culture.

More differences between Transcreation and translation

There are also other factors that go into transcreation that includes more than simply rewriting the source text:

As the world continues to embrace globalization and glocalization, transcreation will always be an extremely important consideration not only for marketers and advertisers, but to businesses and brands looking to expand globally. Transcreated content, if executed correctly, evokes the desired emotional response in cases, where the original expression of emotion might not translate.

**This blog is part of a two part series on transcreation. In the next post, we will break down how companies implement transcreation into their global business strategy as well as providing examples of what could happen when transcreation is not properly executed.