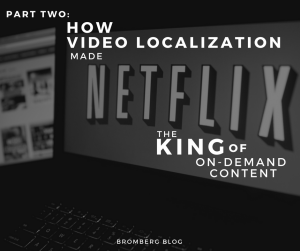 How Video Localization Made Netflix the King of On-Demand Content

You’d be hard pressed to find someone who is not familiar with Netflix impressive content offering. In fact, Netflix is the leading company in the highly competitive streaming industry. But its their approach to video localization that allows Netflix to gain such a large market share each year.

We discussed how Netflix focuses on video localization by dubbing, subbing all video content so that viewers from all over the world can enjoy their favorite programs and movies in their native language. Additionally, they may employ other localization techniques in order to reach broader audiences such as producing a given show in the country of the target audience and using actors from that country to better connect with the viewer.

In this post, we will highlight some of the challenges Netflix may face when localizing content worldwide and what Netflix has done to overcome them.

How Netflix pays Attention to Internationalization

In addition to being smart about video localization in terms of their programs and advertising, Netflix scored high when they designed their interface to support on-screen keyboards for various languages.

And they don’t just leave it at that. In fact, Netflix perfects its internalization by listening to critiques from developers and consumers alike, and then fixing them for a flawless global experience. Although they’re small moves, Netflix is king because it pays attention to the little user experiences.

While it takes time to grow an international company, solutions that help streamline translation management and other daily to-dos can help business owners focus on more pressing tasks. Netflix is now a video localization king, but they might not be where they are today if they hadn’t considered localization as the foundation of the process instead of an afterthought. And that is how their their own translation testing platform: Hermes came about.

“Our desire to delight members in “their” language, while staying true to creative intent and mindful of cultural nuances is important to ensure quality,” says Netflix about the goal of their platform.

Before the launch of Hermes, Netflix was contracting third parties to manage the translation of their videos and platform. However, the outcomes were inconsistent. The invention of Hermes streamlined the file-handling process and, now, Netflix acquires translators unparalleled in quality. These translators are then handed off to either the in-house Netflix team or its partners in localization.

Hermes asks translators to complete an 80-minute timed test and an application to demonstrate their credibility. If they do well, they’re added to the growing database of top-notch Netflix translators who get to work on various projects that pay from $7-$30 per minute, depending on the job.

While Hermes isn’t the perfect solution for every company, it is the perfect example of how a business that understand the importance of localization and internationalization can rise to the top. And with over 47 million global subscribers, Netflix must be doing something right.

The Challenge of Finding Talent

Even with systems similar to Hermes, some companies aren’t able to keep up with the demand for localization. Subtitling and dubbing areas are especially feeling the pressure. While dubbing isn’t a new concept, the rapid need for products to be localized is growing quicker than talent.

In addition to much-need dubbers, actors who can actually perform in the localized target language are in-demand. This means that the actor should be able to read the script in the original language well enough to understand his part, and he should also be able to embody the character flawlessly in his native language. While this makes it tough to find the perfect talent, agencies that specialize in localization and talent acquisition, such as Bromberg & Associates, can help.

Even, when two countries do share the same language, such as in the U.S. and the U.K., many shows’ premises or themes don’t play well with every type of audience. It becomes even more apparent in countries and regions that may have less in common culturally and linguistically. This process of localization themes, ideas, and concepts is part of what’s known as transcreation. Check out a few of these examples from Netflix and other media

Netflix ran into a few of these transcreation issues with their own audiences, but they were always quick to take action and please their consumers, no matter where they resided. For more on this concept, check out this “What is Transcreation?” blog. Also, Bromberg & Associates provides professional Transcreation Services.

Although Netflix still has room to grow, they’re bounds ahead of the competition. While due in part to their wildly successful original series, their success is also owed to Netflix’s willingness to localize for various audiences.

Most importantly, Netflix’s success makes two things clear: firstly, real human localization specialists and their unrivaled ability to connect to international viewers  will be essential in the digital media industry for years to come. And secondly, if Netflix continues improving on what they already do very well, soon we’ll all be binge racers.

**At Bromberg, we understand the importance of video localization for businesses and organizations. By investing in localization services, you can be sure that your product, business or organization is not only accessible worldwide, but also appealing to your target audience’s culture. Be sure to read this blog on how website localization can transform your business and contact us to learn how we can help you.