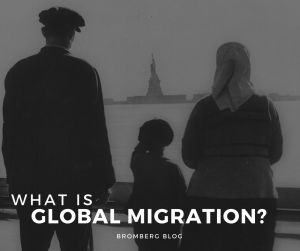 What is Global Migration?

Global migration is debated just about as often as it is misunderstood. However, the reasons why people migrate differ depending on an individual’s situation. In this post, we will explore what exactly is global migration, dissect its current state, highlight some of the factors that cause global migration, and study the pros and cons associated with global migration.

In addition to professional Translation Services and Cultural Awareness Training, Bromberg & Associates also provides Relocation Services for people who need to move to another country. Now, let’s take a look at the state of global migration presently.

As a global phenomenon, people are moving just about everywhere. In particular, Quartz Media LLC indicates that the largest area of regional migration is from Southeast Asia to the Middle East, which is largely due to oil construction booms on the Arabian Peninsula. The biggest flow between individual countries is between Mexico and the United States, the latter making up the largest single migrant destination in the world. Many migration routes are within the same continents and regions, with people moving to neighboring countries.

How people migrate depends greatly on each nation’s current immigration laws and the safety of the route itself. While some migrants are able to travel by airplane or train, others do not have the same luxury. Those looking to enter Europe through North Africa often face a particularly perilous route: an extremely overcrowded boat over the Mediterranean Sea, sometimes with a Saharan Desert trek directly beforehand. Transportation is one of many examples of how migration can take drastically different forms.

Why do people move?

Global migration can be understood as a cause and effect relationship, though the causes are just as numerous as their effects. People move across international borders for a variety of reasons, including (though not limited to):

Some of the reasons that trigger global migration can be explained by what’s known as the Push-Pull factor. Pull factors are factors in the destination country that attract the individual or group to leave their home. These factors attract people to a new place largely because of the opportunities presented in the new location were not available to them previously.  An example of a pull factor would include a family moving from a country with minimal job opportunities to a new location with more opportunities for a successful career. The beneficial elements that the new country presents encourages people to migrate there in order to seek a better life for their families.

A push factor refers to conditions which force people to leave their homes. A person would typically move because of distress (safety, natural disaster, or political conflict). Although push factors don’t require a person to leave their home, the conditions impacting the push factors often negatively impact the quality of life for the person if they choose to stay. Places that experience drought and famine, war conflicts, and/or high unemployment would contribute to the push factors that trigger migration for that country’s residents.

Push factors, in particular, are often underestimated in their popularity and frequency, which is emphasized by Manpower Inc.’s survey of employees across 27 countries. In this survey about relocating internationally, 82 percent of respondents said they would move for a pay increase, 74 percent would move to increase their career, and 47 percent would move to learn another language. In short, people migrate for all kinds of unexpected reasons.

Does migration improve the quality of life?

Whether individuals migrate due to push or pull factors, there are undeniable benefits involved with adapting to a new country. Some benefits are simply fun and exciting: learning a new culture and experiencing new opportunities, such as tasting new foods and getting to know a different approach to communication, or immersing yourself in the new cultural activities, can be exciting and enriching.

Other benefits, namely personal freedoms, are essential. People may leave their home countries in search of safety and religious, academic, or political freedom in their new countries. It’s estimated that around 11 million Syrians have fled their homes since the outbreak of the civil war in March 2011; many fleeing for their safety in search of a better quality of life for their families. In this example, migration can improve peoples’ lives drastically.

Migration can present a great variety of challenges ranging from simple discomfort to profound shifts in mental health. Migrating to a new place where the diet or the local culture is largely unfamiliar may be quite jarring. Imagine moving from the US where drinking coffee or tea in the mornings is the cultural norm to living in Central Asia where in some parts, drinking salty yak butter tea is the norm.

Culture shock is a predictable culprit for migratory challenges: changes in language, diet, politics, religion, and environment are immediately visible. For example, those who migrate from the Middle East or Africa are aware of the difficulties of adjusting to colder temperatures in Scandinavia. What might not be as obvious, though, is the challenge of adjusting to extremely short daylight hours in the winter, making seasonal affective disorder an unanticipated hurdle for many immigrants.

Furthermore, the act of leaving a home country can be emotionally difficult, especially for those who may never be able to return and/or were forced out by situations that they couldn’t control. Having to emigrate as a refugee from a war-torn Syria, breaks up families and can destabilize immigrants’ sense of self, which could lead to depression. These challenges obviously should not be taken lightly – help and support are key.

People and families that migrate may need language assistance in schooling, medical language services and translation of personal documents required for migration.

The reasons why people migrate are seemingly as numerous as the world’s countries themselves. The UN Population Division states that since 1960, at least 2.5 percent of the world’s population have been international migrants. The combination of these two ideas means that this concept is not new: migrants have been, are, and will continue to be part of our communities which are increasingly more vibrant due to the integration of new cultural influences. By welcoming migrants into our communities, this ensures they will adapt to the local culture quicker and more efficiently as well as enriching the community by the exchange of new ideas and cultural norms.

**At Bromberg, we embrace the diversity within our company and communities we work with. Our team of highly trained interpreters and translators are ready to help with your communication needs. Be sure to contact us for translation services or for a quote on your next translation project.